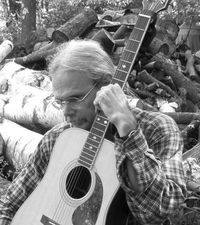 Jon Clark has been writing songs since the early 70's. After way too many years, this singer/songwriter released One Long Skid Volume 1 and Volume 2 of his collection, followed by his "A Knot In Time" album. He was born "with Gabriel's trumpet at his side" (and it hasn't strayed too far since). Coming from a musical family, it seemed natural to pick up and play any instrument that happened to be around. Jon bought a used 5-string banjo and proceeded to scare the neighbors dogs with it. Later he gravitated towards the acoustic guitar and lap steel.

During the 70's there was a renewed interest, a revival of sorts, with bluegrass, folk, and country music among many "Woodstock Generation" musicians. Folk rock was flourishing. Kentucky and San Francisco collided, and western cowboys were seeing more colors than brown.

Inspired by this movement, Jon started to write songs and jotted them down in a spiral bound notebook. Many of these songs lay dormant for years, tucked away in life's closet of accumulated stuff, until a shuffle of cards brought them back to the top. In the past few years, Jon is back writing songs, playing guitar, and singing about people places and things that he has skidded into. 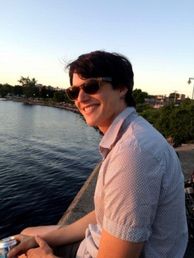 Gordon, son of Jon Clark, is a multi-talented musician and an integral part of the "One Long Skid" projects. His guitar playing is a vital element for the making of all the OLS albums and their live performances. Gordon has been the guitar/vocal front man for "The Stoolz" and "Bear Pickens", as well as trombone player and horn section leader for "Bearquarium" from Burlington, Vermont. He is a founding member of the band "Terrapin Tuesday", based in Easthampton, Massachusetts. Gordon has the ability to see the big musical picture, and "lets those notes go for a ride".

One Long Skid  musicians for Volumes 1 and 2:

Jack, also known as "Loopy Jack", has gained quite a reputation for his outside bass playing adventures. In addition to his interests in free form jazz and juggling, he is often heard singing bass in various underground a cappella vocal groups throughout Europe's finest metro systems. Jack and Carlan Jan Koth were once banned from performing in the streets of Amsterdam, when local officials deemed their act too dangerous for the general public. Lured to the United States with the promise of fame and fortune as a studio side musician, Jack now resides back home in the Netherlands.

"Crazy Carl" enjoys surfing and raising pygmy goats with his long time partner Heidi on the beautiful island of Maui. He enjoys agricultural pastimes and learning more about the difference between white and black keys. While often lured to the mainland with the promise of fame and fortune as a studio side musician, Carl now resides back home in Hawaii.